Posted on April 25, 2018 by shepherdguardian 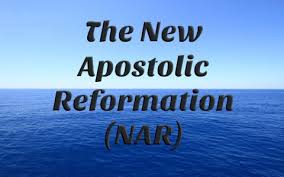 The New Apostolic Reformation (NAR) is a dominionist movement. NAR doctrine also asserts that God is restoring the lost offices of church governance, namely the offices of Prophet and Apostle.

The New Apostolic Reformation (NAR) is a title coined by Charles Wagner to describe a movement that seeks to establish a fourth house within Christendom (distinct from Catholicism, Protestantism and Orthodox Christianity).

Leading figures in this seemingly loosely organized movement claim that these Prophets and Apostles alone have the power and authority to execute God’s plans and purposes on earth. They believe they are laying the foundation for a global church, governed by them.

They place a greater emphasis on dreams, visions and extra-biblical revelation, than they do on the Bible, claiming that their revealed teachings and reported experiences (e.g. trips to heaven, face-to-face conversations with Jesus, visits by angels) are all valid means by which God is revealing a new…

This entry was posted in Uncategorized. Bookmark the permalink.